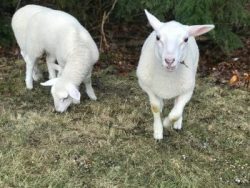 Cheese caves are fascinating AND scary places. First of all, they are cold and damp. Often they are isolated and there is an over-riding hum of air-conditioning and humidifying machines which create constant white noise … “if I get locked in here will anyone hear me?”

But even after you overcome the physical aspects of the cheese cave, there is the psychological component. Cheese caves are all about damage control. Staying on high alert, catching anything early that could get out of control is key to affinage. Oh, and forget about leaving for any extended time!

Making the cheese is the easy part … aging the cheese requires commitment, a dose of insanity and a great spouse willing to jump in to correct any adverse change in temperature or humidity … at any hour!

Some cheeses like to be high on the shelf where there is less moisture, a little bit warmer air and sometimes slightly more ventilation. Others like to be low or maybe tucked in between a few cheeses and a back wall. When things are going well, everyone seems content. The molds forming on the cheese are appropriate for their age. There are no cracks and there is a pleasant odor to the rind.

When things are not going well … it’s a little stressful!

It was a cold winter afternoon. I was apprenticing and the master cheese maker was going away for 2 weeks. I assured him that I felt comfortable and there were no worries. I go this!

Into the second day alone, I noticed that the floor of the cheese cave seemed excessively damp as the cooling unit was no longer required to run as frequently and therefore no longer removing excessive moisture. There was also an eeriness to the cave as a result of the stillness in sound. The cave was getting crowded. The cheeses seemed a little discontent …  We had been making lots of cheeses which required longer aging and ‘real estate’ was becoming scarce: a good thing in the summer as more cheese means more humidity to counteract the air-conditioning unit. A bad thing in the winter.

I had suspicions that the cheeses on the lower shelf did not like their position. They were young and their rinds susceptible to outside influences … sort of a pre-teens? I noticed on one, cheese the early stages of wrinkling. I quickly closed my eyes, turned out the lights and left the cave. A few days later, while washing the other cheeses, I glanced again and noticed more wrinkling! Again, I closed my eyes, turned out the light and left. I couldn’t stop thinking about it. The wrinkling was a sure sign of Geotrichum, a mold that belongs on Brie, Camembert and other soft cheeses. Not cheese destined to be a hard cheese!

The time had come that this cheese needed to be washed as it was up next on the schedule. Ugh! I thought. I gently washed the normal areas of rind, but when I barely brushed the wrinkly section with my cloth, I noticed that the layer beneath seemed almost to be melting and the rind would have released from the underlying cheese if I continued. By now I was 1 week into my time alone as cheese maker.

I really did not know what to do. I examined the other cheeses on the shelf, a total of 50 lbs! I had to do something. I began the slow process of relocating cheese wheels, not an easy task when there is no room to relocate. I tried to think about who seemed to like being lower on the shelf, or at least who could tolerate it and gradually moved wheels from one place to the other.

Phew! Only 1 more week! I have no idea how the story ends … whimp! 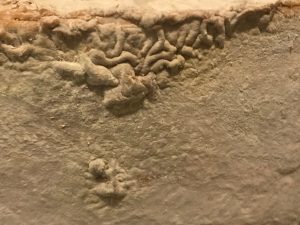